Thomas is the joint owner of the French & Day Delicatessen on Ware High Street, along with his husband. Both have lived in Ware for over 9 years. Thomas is originally from Hertford and most of his family are still local.

Thomas has been involved with the East Herts Green Party for a number of years, assisting in the 2019 Local and General Election campaigns as the manager of social media and printed communications. He can often be seen wielding a litter picking grabber and contributing to community activities to look after our green spaces.

A keen interest in food, drink and travelling led to the opening of the deli in Ware where Thomas keenly supports local producers and showcases low-food-mile products from across the region. 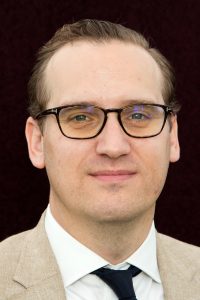 As a local resident and small business owner, I am keen to see Ware prosper as a community; both economically, with a strong and diverse high street, but also in terms of the health and happiness of its residents.

The unprecedented events of the 2020/1 have seen a break with ‘business as usual’ and I believe there is an opportunity for Ware to undergo a renaissance as a community that cherishes its independent businesses, boasts a vibrant and diverse night-time and cultural economy and that prioritises the wellbeing of its residents through the active promotion of sustainable policies.

I am supporting the 20's Plenty for Hertfordshire campaign. 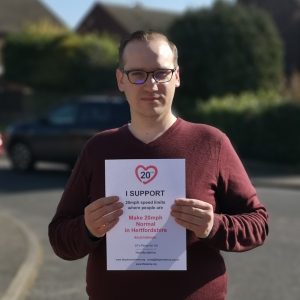 I recently opened a business on the High Street, so I confess I have a vested interest in wanting a vibrant and prosperous town centre. Through the business, I have already been speaking with Sarah Fenton, who is the ‘Town Centre Project Manager’ and I know that there are lots of plans for special initiatives and events in the offing once the current circumstances have improved. I wholeheartedly intend to support these as both a business owner and resident and, if I am elected, a member of the town council. It is my personal view that the current situation has given people an opportunity to rediscover their town centres and, for Ware in particular, this could provide the opportunity for a bit of a renaissance. I certainly believe that our little town has a lot to offer!

Green Belt land North & East of Ware has been allocated for a mixed-use development of 1500 homes. The Green Belt was established in 1955 to stop urban sprawl, but the Conservatives are allowing increasing development in Hertfordshire’s green belt as part of their plan to suburbanise the London to Cambridge corridor. Green Party policies on the green belt are clear and unambiguous.

The farmland and woods to the north of Ware are a beautiful part of our green and pleasant land. The woods, hills, rivers, and meadows are a resource for us all. Generations of Ware residents have enjoyed walks across these fields, have played there as kids, and watched crops grow and wildlife thrive as the seasons came and went. Now that’s all under threat from developers’ greed putting profit over people and the places they love. It’s time for a counter-attack.

The Green Party will make it easier for communities to block the wrong type of development. The planning system is based on a presumption in favour of development, which loads the dice in favour of speculative developers seeking high profits. We will repeal this presumption and replace the current National Planning Policy Framework with spatial plans that preserve ecological habitats and prioritise council house building on brownfield land. A new developer’s duty will ensure that a greater share of the profits that are created when new homes are built goes back to the local council, to be spent on planning new council homes and accessible green spaces for the community. We will strengthen existing Green Belt planning protections, prohibiting all inappropriate development. The Green Party has never, and never will, accept funding from commercial vested interests.

"I’d like to express my extreme regret over the potential loss of our precious green belt, but the land isn’t lost until it’s built on. Green Party Policy is to encourage applications from communities for Green Belt designations. This would be my preferred method of stopping the Ware North & East Development and I commit to working towards this objective. If we can’t stop Ware North, and with Tories in control of government and councils and determined to push ahead it will be very hard, then we have to fight to make it as green a development as possible in every sense and maintain access to the countryside for us all. Looking to the future we must make sure this can’t happen again in East Herts."

"The Green Party recognises a universal human right to shelter which is affordable, secure and to a standard adequate for the health and well-being of the household. The housing crisis is complex and the dogmatic Conservative policy of allowing market forces to provide is causing misery, distress, and social injustice whilst enriching landlords, investors and property developers. Meanwhile we have over 25 million unoccupied bedrooms in British homes. What we need is a functioning housing market, not more sprawling housing estates suburbanising our countryside. Where new housing is required, mid-rise integrated housing as used in Barcelona and Paris is a more efficient use of limited land area, achieving more than 50,000 people per km². To meet our housing needs without loss of green belt, Stevenage, Hatfield, and Harlow should all be redeveloped to provide high quality, decent, and attractive homes that the community can be proud of."

I’d like to express our huge misgivings concerning the proposed developments in the north and east of Ware. I live very close to the eastern area and, up until lockdown #1, I had been commuting into London daily. I have experienced the joy that is a packed commuter train. The prospect of even more people using the station as it is currently configured will be quite simply unworkable. However, if I am successful in being elected to the town council, I will be able to raise my concerns and try to contribute to its official position as a consultee in the planning process.

In response to questions about Ware's Christmas Decorations:

I have to say that the coloured plastic lights have become somewhat of a retro tradition in the town. I can remember them being there when I used to visit Dickensian evening as a child! It was great to see some additional elements last year, however. The ‘Ware Bear’, in particular, was a brilliant idea! I would support traditional and new ideas to lift Ware.

I believe strongly that Herts County Council must divest its pension funds from fossil fuel companies and start to invest in a green recovery.

Published and promoted by Alexandra Daar on behalf of the Green Party, both at 14 Woodhall Close, Hertford, Hertfordshire. SG14 3ED.