Ben Crystall and his partner and have lived in Bengeo for almost 20 years. His career has focused on science - after a PhD in solar energy, he spent 6 years at Imperial College London where he worked on solar power, anti-cancer drugs and new light-sensitive plastics. In 1996 he switched careers and became a science journalist, working as a writer and editor at the weekly magazine New Scientist.

Since leaving the magazine about 6 years ago, Ben has been a governor at his son's school, helped set up Transition Hertford with a local group of environmentalists, and was one of the founders of Hertford Energy Now (HEN), a not-for-profit, community-owned, renewable energy co-operative. HEN now has more than 50 members, and has put solar panels on 3 primary schools in East Herts, saving them money on electricity bills and cutting their carbon emissions.

In 2019, Ben was elected to East Herts District Council for Hertford Bengeo, where he is on the planning and licensing committees. Ben became East Herts Green Party's first ever representative on Herts County Council, for Hertford All Saints, in 2021.

When not busy with council-related work, he can be found walking the dog, digging in the garden or veg patch, dabbling in archaeology and local history with like-minded folk, or simply dreaming of holidays on Cornish beaches. 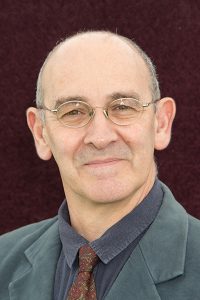 I campaigned with the following manifesto in the County Elections in May 2021:

Having lived on Byde Street in the middle of the rat run, I completely understand the problems that residents face – traffic that’s too fast for the space, collisions, and angry drivers, damaged cars and property, air pollution, noise and a genuine danger to life. Past attempts to solve this failed, mainly because it’s a complex issue. To change that, I feel strongly we must tackle parking and traffic flow as two separate issues, and solve each one in turn. That’s why I have been supporting residents to find road-calming measures like planters, road markings and signage that can change driver’s attitudes to the area, making it clear this space belongs first to residents, and that pedestrians and cyclists have priority. Making it less attractive as a short cut is the first stage. In the longer term, I want to see families enjoying their residential streets in relative peace, like others can elsewhere.

Lights at the Bluecoats Roundabout Expand

The sudden change of the part-time traffic lights at the roundabout to full-time operation raises lots of questions. Herts County Council has provided some accident data to suggest that full-time lights will make the roundabout safer. There are fewer accidents when the lights are on, they say. On the face of it, I can understand that this is a change for the good.

However, I’m worried that this “solution” is not really addressing the fundamental problem, while creating new issues at the same time.

For example, if it turns out that most of the extra accidents occur at night, could it be because road lighting is not good, or because people are speeding or jumping the lights? Could it be better solved with improved lighting, slower speed limits or cameras on the lights? Maybe it is the road layout at fault? Has a proper analysis been made of these issues?

I'm also concerned that Gascoyne Way is in Hertford's Air Quality Management Area where any changes that make air pollution worse – like the extra queues of idling traffic created by full-time traffic lights - go directly against policies in the East Herts Council District Plan, since queuing will almost certainly lead to worse air pollution for residents. Air pollution levels here are already high. Was EHC, or residents, consulted on this change? Has HCC Highways modelled the impact of the extra air pollution since this will also be a safety issue for all of us, especially children at nearby Abel Smith School and those who walk through this area daily. I want answers from HCC.

With town, district and county councils all dominated by one party for more than a decade, it’s hardly surprising that residents in Kingsmead and Bengeo no longer feel like their councils are listening to them. I want to change this.

How? First by providing a strong opposition which is vital for any local democracy. Secondly by encouraging all residents in Kingsmead to become involved with their local Neighbourhood plan, which will play an important role in how your area develops in the next decade or so. In Bengeo the plan is almost complete – the final stage is to vote to support it, and I’d urge everyone to do so.

Lastly and most importantly, I will listen to residents, to hear both good and bad. I’m not afraid to stick my head above the parapet. Only by doing this can your councillors understand what is wrong, and then keep residents properly informed and up to date on anything that impacts your area.  Sharing information openly is key – there can be no silence or evasion from your councillors. That way we can act together to protect and enhance our neighbourhoods.

How can we do this more efficiently? I want to develop new routes to stay in touch, using social media and regular news updates. I will encourage every street to have its own social media where residents can swap information and support each other. Residents in those streets can then work together to contact local residents associations, or councillors, as required. There must be an open, frank exchange to get things changed for the good, and we need to use new technology to achieve this.

One of the most common complaints I hear is that roads are too fast. Fast traffic is dangerous, noisy, and pumps out air pollution that causes everything from lung damage in kids to helping trigger things like high blood pressure, depression, heart disease and dementia.

So my priority is to fight for slower traffic in our town – a 20 mph speed limit on urban roads is the first obvious step. There is plenty of research to show that slower traffic encourages walking and cycling, brings cleaner air, and encourages communities to socialise together.

The aim is not to make life difficult for drivers, but to create a slight shift in priority in all of us. Do our streets have to be dominated by fast, noisy vehicles? Wouldn’t it be more pleasant if traffic was slightly slower, and parents were less concerned about children cycling, for instance, and it was easier for neighbours to talk to each other without shouting over the traffic noise?

These kinds of changes are already occurring all around the world. Let’s bring their benefits to Kingsmead and Bengeo too.

I am supporting the 20's Plenty for Hertfordshire campaign. 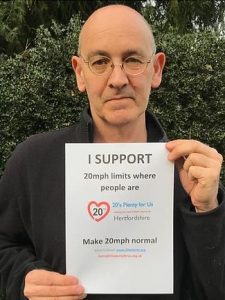 I believe strongly that Herts County Council must divest its pension funds from fossil fuel companies and start to invest in a green recovery.

Published and promoted by Alexandra Daar on behalf of the Green Party, both at 14 Woodhall Close, Hertford, Hertfordshire. SG14 3ED.